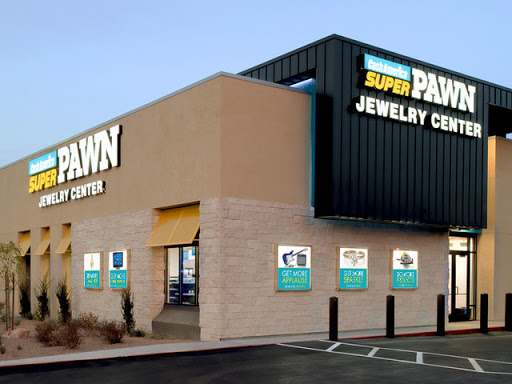 Horrible place. Terrible staff. Under educated. I brought a brand new laptop in asking for 50 dollars on loan. The rep who helped sat there while i put in all the passwords so he could view the specs, when i turned it to him he closed itand said he didnt need the specs. Waiste of time. Then he said it wasnt worth a penny. Went to EZ pawn and they said i could borrow 100 dollars. Then i went in a week later to buy a wii. Asked if they make sure there stuff works the manager said yes. I get home and it wont accept disks. Then they charge me 5 dollars to buy a different model to rectify the issue. Worst pawn shop iv ever been to in my life. And i use the service often. Will never go here or any super pawn again

The service was professional and courteous. Went in to try and get a loan on what I thought was 6 sterling silver rings, but they did not accept silver; however, they did me the courtesy of testing and examining each ring and determined that one of the rings was in face white gold, not silver and gave me what I needed for that one ring. I am completely happy with the service and the amount offered. Will go to again if I ever need to again in the future.

Lots of items for sale and I like that they offer layaway for some items. However the one thing that bugged me was when I kindly asked the employee if they sell single cell phone chargers and she couldnt even look me in the eye. She just shaked her head and said nope. Customer service is something that they defitnately need to work on.

This place SUCKS. Poor customers service. I bought an HTC Amaze which after the 3 days stopped working the store wouldnt give me the cash back, only store credit so I purchased the Sony Xpheria only to have the battery fail. I demand my full cash back and will not do business here AGAIN

Worst pawn store ever. Slow and unorganized.I was waiting for help at least 45 min for a damn HDMI cord and three blue ray movies

i bought games and movies and they were great and the price for ps3 games are $10 and movies are 1.99

did not answer my questions just hung phone up on me

They take forever to get to their costomers

brush your intolerant wretch of a mouth

These people are going to pay one day.

Been to buy stuff and sell stuff